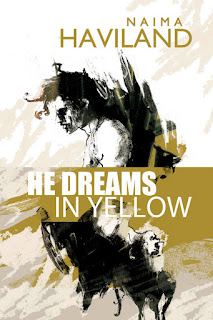 As my Halloween gift to you, download a free eBook from Smashwords through November 1 (Mexico's Day of the Dead) -- my horror short story, He Dreams in Yellow.

Tortured by heightened senses and haunted by depression, Malcolm lives in seclusion on his English estate under the care of professionals paid to watch his every move. On his mind, under his skin, and just out of the corner of his eye, is the woman linked to the catastrophic event that sealed his fate. An original short story also featured in Night at the Demontorium.

In retrospect it looks like Malcom's character is a modern day homage to Edgar Allen Poe's doomed Roderick in Fall of the House of Usher. However, He Dreams in Yellow was inspired by a nightmare from which I woke screaming.

Download He Dreams in Yellow, a free short story for Kindle, Apple, Kobo, Nook or PDF from Smashwords.
Posted by Naima Haviland at 9:48 PM 2 comments 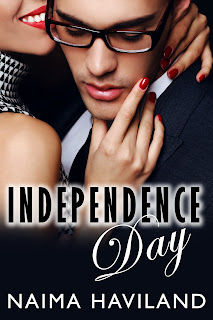 Free for Kindle and all e-readers with coupon code FJ29W at Smashwords through July 5.

I didn't know I had it in me. I wrote a light romance! It's a holiday-themed short story set on the 4th of July.

Department store magnate Clyde Anderson is a cool drink on a hot day and just being near her boss thrills Jonquil like 4th of July fireworks. Fantasies about her secret crush never featured them trapped together in a runaway elevator on America’s birthday, but Jonquil’s emotions always have had unpredictable effects on her surroundings. Her ingenuity and his courage are the perfect match against mechanical mayhem. Will the holiday’s unexpected adventure prove these partners-in-peril are perfectly matched for each other?

Happy 4th of July -- and that goes for all my friends outside the US, too!
Posted by Naima Haviland at 9:51 PM 0 comments 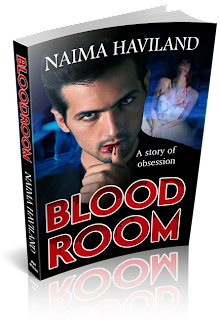 I need your help choosing a book cover for my upcoming novel Coffin Land, a vampire thriller with a steamy romantic subplot, set in Charleston, South Carolina in 1788. Vote for your favorite  cover idea to be entered into a random drawing for a $15 Amazon gift card. Tell me in a comment: Which cover would make you pick up the book?

Enter to win a $15 Amazon gift card by commenting below on your favorite cover. Be as wordy as you want! Why do you think that one's the winner? And which are runner-ups? Feel free to critique, but keep in mind these are rough mock-ups. Drawing date: Monday, August 24, 6 PM central.
Posted by Naima Haviland at 7:17 PM 1 comments

Night at the Demontorium - Book Review 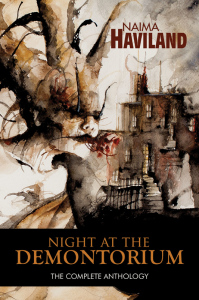 Calling it "a psychological ride of amazing proportions", Project iRadio gave Night at the Demontorium: The Complete Anthology a great review. Here's an excerpt:


Pulling in the reader with a cyclical journey of amazing precision, Naima Haviland’s Night At The Demontorium: The Complete Anthology weaves together eight very distinct, yet very connected tales of incredible depth and beauty.

Wow, thanks! That is not a bad send up for my short-story demons, all of 'em working their evil little tricks on the imaginations of readers. You can buy the book at Amazon, Smashwords, and other online vendors. As Project iRadio said,


For those who are fans of Rod Serling, EC and Creepshow Comics, this anthology is one you will love.

Posted by Naima Haviland at 8:39 AM 0 comments

Why Does the South Inspire Vampire Writers?

I'm at the World Horror Conference 2015. Tonight I was on a discussion panel, the topic Weird South: I Will Never Go Hungry Again: Why are So Many Contemporary Vampire Novels Set in the South?

My fellow panelists were:


Ok, what is it about the South that inspires vampire writers? Charlaine Harris pointed out that the South is often economically depressed; really chronically depressed, and that people in peril develop rich, supernatural beliefs to explain the unpredictability of the human experience. (Charlaine doesn't really speak this way; this is me paraphrasing her. She's much more plain spoken, charming, and funny. When describing Southern traditions, such as "the nice lie", her turn of phrase made us and the audience laugh out loud.) Dacre Stoker compared Romania to the Southeast US, in that their cultures were infused and enriched by immigrants over the centuries -- Romania by Romans, Turks, Romany gypsies, and Europeans; and the South by Scots, Irish, Native Americans, Africans, French, and West Indians -- and suggested that the influx of so many different cultures brought a crazy quilt of legends. Andrew Greenberg stressed that the influx of cultures did not make the South a melting pot; rather these cultures, by not blending, created tension that results in legends built (as all good novels are) on conflict and tragedy (and sometimes, though rarely, triumph). Jess Peacock built on this idea, emphasizing the vampire as the Other; an invading entity that is foreign, mysterious, dangerous, and tempting; saying that Southerners' clannish nature identifies anyone whose great-grandparents weren't born in the South as a suspicious Other. (I can attest that this is true -- after living here for 25 years, they'd still say to me, "You're not from around here, are you?") Carl Alves suggested that the Southern personality itself -- reckless, passionate, and romantic -- embodies the traditional vampire mystique. He invited us to imagine Bram Stoker's Dracula coming of age and being turned into a vampire in urban London instead of isolated, exotic Romania (Transylvania). It would have been a completely different novel! I suggested that the vampire's obsession with his (or her) prey -- that hypnotic, relentless, possessive hunger -- mirrored the South's climate and nature, its vibe. There is something about the South that gets inside you, clings and holds you, just as the Kudzu vine grows until it completely covers the building in its clutches, pulling it to the ground in the span of a few years. I have found that the South, though maddening in many ways, has wound itself around my heart. I will probably never move away. Like a vampire, the South is beguiling, entrancing, and seductive. There are logical reasons to run from a vampire, but logic can't hold out against his allure.

Why do you think the South is so inspiring to vampire writers?
Posted by Naima Haviland at 10:37 PM 0 comments

Resources for Self Publishing Your Book

I started self-publishing in 2011. At first I knew nothing about how to do anything! Now, it's pretty easy. I enjoy self-publishing for the creative control it gives me and the direct payoff in higher royalties vs. those I'd get from being published by someone else. Here are the resources that either helped get me on my way or help me turn my ideas into real print books, ebooks, and an audiobook.

In 2011 Steven Lewis had online tutorials on formatting for Kindle. I believe he focuses more on social marketing today. I found his books about the self-publishing industry helpful, too. http://taleist.com/#home
I use the free formatting software, Calibre, to format my ebooks in formats for all readers and devices (ePub for iPad and Nook, mobi for Kindle, etc). Its UI has options for building a Table of Contents, testing your format out in a device simulator, and so on. I test drive all my ebooks with Calibre before actually publishing. The Calibre ebooks are also the files I give to reviewers. http://calibre-ebook.com/

I built my author platform across social networks mostly through Shelley Hitz's webinars. For instance, I learned how to set up a Facebook Fanpage and Twitter presence, and use tools to streamline my social marketing efforts. She packs extras into all her service packages and recently expanded her service offering. http://www.trainingauthors.com/
Guy Kawasaki is a social media guru. The best advice I got from him was on what and when to tweet. http://guykawasaki.com/
On my blog, for publicity purposes I have events that include random drawings for prizes. Rafflecopter is the web service that powers that: https://www.rafflecopter.com/
My New Releases Newsletter is facilitated with MailChimp: http://mailchimp.com/

I cannot stress the importance of hiring an editor, getting professional cover design, and having a great back jacket book description. If you're going to spend money, spend it on this and don't flinch at the cost. I mean, don't you want your book to be the most professional product possible? Think how much brain sweat you put into writing your book. Don't you deserve to see your idea beautifully polished? Some reviewers of my books say that my book cover or my book description made them buy the book (and that's some motivator, considering that they'd never heard of me).
Derek Murphy designed for my vampire novels, Bloodroom and The Bad Death. He's stopped taking new clients (for now, anyway) but is branching into DIY design advice. http://www.bookcovers.creativindie.com/
Daniele Serra designed covers for my short stories and my anthology Night at the Demontorium. His work has won several awards. http://www.multigrade.it/
Editing! OMG don't you dare publish your book without one! Pick up a book published by a big NYC publisher, read the acknowledgements, and you'll probably read the author thanking up to three editors. At least do yourself the favor of hiring one.
Glen Krisch edited my novel, The Bad Death, and my anthology, Night at the Demontorium. He cured me of some bad habits. He's also a writer. https://glenkrisch.wordpress.com/
Linda Wasserman edited my novel, Bloodroom. She's a grammar and sentence master. She's also a publisher. http://www.pelicanpresspensacola.com/id4.html
ACX is the audiobook wing of Amazon's publishing services. In a way it's like match.com for writers and narrators. You can call for auditions or you can browse for a narrator that offers the type of voice you're looking for and then listen to their audio samples. I'm not gonna lie; it was expensive, but I'm so happy with my audiobook! http://www.acx.com/

I follow the blogs of writers who keep their ear to the ground in terms of how the big publishers are doing business, how self-published authors can get noticed in the ocean that is Amazon, and issues related to these topics.
In addition to crusading against sharks and reporting on latest industry developments, David Gaughran writes weird, thoughtful short stories and wrote a South American adventure novel. https://davidgaughran.wordpress.com/
In addition to advising on writing and making money from writing, JA Konrath writes thrillers and is hugely successful. http://jakonrath.blogspot.com/
﻿
﻿

Be the First to Know!

Naima Haviland
I like dead people. Fictional dead people, that is, and the twisted people who make them dead (or undead). I write novels and short stories where a person is confronted with evil, either supernatural or human, external or inside himself. My fiction is available in all digital formats at smashwords.com, as well as amazon.com/kindlestore and other direct to device bookstores such as Barnes&Noble and Diesel. Thanks for your interest!

Promote Your Page Too